The Beer Race That Stops a Nation

I had a great experience a couple of years ago when I came across one of the greatest running races I’ve ever experienced.

My family and I went camping with some friends of ours to a country town called Stawell in North Western Victoria in Australia. Being well known for the Stawell Gift, Australia’s richest footrace, it’s run over 120m and attracts many locals and visitors.

Although this is not what we came to Stawell for, we actually went there just to visit Stawell itself, a lovely town founded in 1853 around the gold rush era. But never mind this, I want to let you know of the other race we experienced.

On our 3rd day in Stawell, we decided to venture over to the horse races which are in walking distance of the camping ground we stayed at. No, this isn’t the feature race, I’ll get to that soon. A great day was had, even though I couldn’t place a winner on the day.

As we walked back to the campsite, a large crowd of people were gathering around, near where we had pitched out tents.

We like to go un-powered when camping, so this generally means way down the rear of the camping site. As we got closer I bumped into a camping neighbor and asked what all the commotion is. He said an annual ritual is about to begin and we were just in time.

So what is this annual event that brings crowds from locals and camping visitors? It’s the The Beer Mile and is a great way to finish off the weekend for some of the contestants that couldn’t progress to the Stawell Gift final.

Although these people are very fit, they also enjoy a beer. So, what better opportunity to do both! 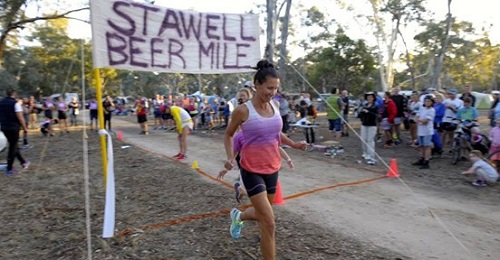 The idea for this race to collect a group of 4 people and each do a lap of half the camp site, which equates to 1/4-mile. However, before running your 440 yards, you’re required to skull a beer and run on a belly full!

But it’s not all athletes that run in this event, anyone can enter (it’s very informal). Having said that, it’s well known enough in the town, that Melissa Breen (4-time Australian record holder for the 100m sprint) first the pistol to start the race.

In fact the Stawell beer mile even has their own Facebook page.

So even though I was asked to take part in a team, I had to decline. I didn’t want my kids to see me throw up after losing the lead, then stumbling over the line!

But as the race start and finish line was about 20m from our tents, we duly set up our chairs for a great view, beer in hand to cheer on the contestants.

Amazingly, only one contestant to chunder but he did it so gracefully. After running over the finish line, he just kept on running and did his business behind a tent. That’s the way to do it.

So the whole race was over in 15-20 minutes and nobody really cared who won the race. All I can remember is that the winner was one of the favourites for the Stawell Gift. Obviously I had a big day out at the horse races before this!

So, if you’re ever is Stawell around April make sure you drop in to experience the Beer Mile in Stawell Grampians Gate Caravan Park.

You’ll have a great time I’m sure it’ll be memorable, if you don’t drink too much!

Data found will be sent to your email address and allow you to put in an additional request to have the data anonymizid.